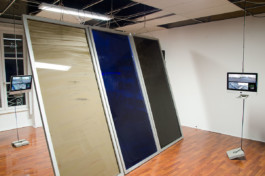 Open space is simultaneously a spatial design concept, a productive strategy and a management tool. Here it is considered as an allegory of a globalized world, advocated as free and open, paradoxically producing numbers of surveillance tools and control devices.

In the open space of the Fabriques architecture agency, we reinstalled the partitions that once divided the space in an ambiguous position, slanting between elevation and falling. Video sequences are screened on the architects’ work tools: the agency’s computers. These sequence shots show specific segments of the former Berlin Wall’s route. The disappearance of the Wall has caused a transformation of the occupation of space and the city’s urbanization. However, this physical change did not erase all disparity between the East and the West. New boundaries, particularly economic and social ones, appeared, but this time they are invisible.