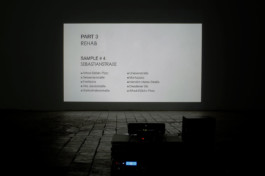 What has the disappearance of the Berlin Wall engaged as a new urban configuration? Walking along Berlin’s Mauerweg (the route of the former Berlin Wall), we film the two spaces once separated by the Wall, in order to study the resurgences of its traces. New and invisible borders occur. Mauerweg-Umleitung is a variation on the video installation Open space, initially presented at Fabriques Architectures Paysages.

Here the sequence shots are requalified as samples, classified and grouped under a term (Sand, Rehab, Flow), as historical echoes of a sort, sociological observations, or political analogies related to the areas the camera passes. The simultaneity and length of each film invites the audience to circulate physically and mentally in the films, building the connections between the areas explored itself, adrift.